Appreciating the best best pork pies Lancashire has to offer

Pitts of Earby – A Masterly Pie 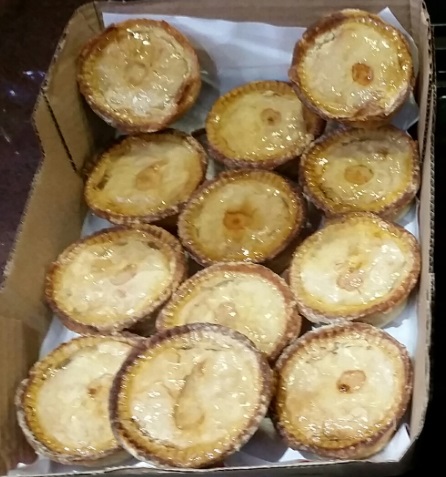 On outward appearance alone, the standard pork pie made by Pitt’s of Earby looked nothing special. Its price tag of just 90p seemed to further confirm its modesty. The pastry looked pale for some tastes too, although the copious jelly on top sharpened the appetite of others. As the saying goes though, the proof of the pudding is in the eating. By the time the LPPAS tasters had greedily finished the 12 sample pies there was unanimous agreement that this was indeed a masterly pie. Although it was still only March, and there are many more pies to sample before the champion pie is crowned at the end of the year, the overall mark of 81% for the pie currently puts it firmly top of the pack. It will take a special pie to dislodge it. Here are the marks of the 14 tasters for the pie:

So what where the reasons why this pie was rated so highly? The first reason was succinctly summarised by one taster who remarked ‘Great overall mix of filling, pastry and jelly.’ The three elements seemed to blend together so that the whole was greater than the sum of the parts. 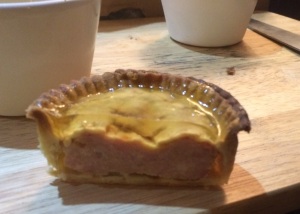 Each of the constituent parts were excellent in their own right though. Of the three, the pastry scored the lowest score, with a still excellent 73%. ‘Delicate, but firm in texture’ was one comment and others agreed that there was an excellent taste to the pastry. The slightly lower score for the pastry than for the jelly was down to those tasters that would have preferred the pastry a little ‘shorter’ – to give the pie a bit of extra crunch.

The pork itself was uniformly pink and with an excellent flavour. The remark that the pork had ‘perfect flavour, texture and appearance’ was widely agreed with. Often tasters seem to ask for more seasoning, but there was none of this for this pie, as one expert put it the ‘pork had an unexpected kick at the end’ No pies is to everybody’s taste though – the only negative comment (if it could be seen as that) was that the pork ‘did the job, but wasn’t a scene stealer.

Lastly to the jelly. It’s fair to say that LPPAS members seem to like their jelly. The outstanding score of 84% for the jelly indicates how satisfied they were with this aspect of the pie. ‘The epitome of a well-jellied pie’ captured the mood, while other comments included  ‘tasty, and lots of it’; ‘perfect’ and ‘spot on!’

All in all the pie richly the deserved the ultimate pie accolade of being a ‘masterly pie’. The fact that it retails at a paltry 90p guarantees that no Lancastrian of taste will be disappointed if they make the journey to Pitts at:

Or use our Pie Finder for directions!

One thought on “Pitts of Earby – A Masterly Pie”